Sue Furner (a 63-year-old mum of five, and nana of seven) is setting off on her next adventure: to walk 630 miles along the South West Coast Path, from Minehead in Somerset to Poole in Dorset. The South West Coast Path is the longest National Trail in the UK. Starting in Minehead it runs along the coastline of Exmoor, continuing along the coast of North Devon into Cornwall, goes across the mouth of the river Tamar and continues into Devon. After running along the south coast of Devon it then follows the Dorset coastline before finally ending at Poole Harbour, the second biggest natural harbour in the world after Sydney. Sue is raising funds for the RNLI.

Sue has lived in the Isle of Man for 24 years. A runner of marathons when she arrived from the Netherlands, she got into long-distance walking on the island, taking part in the TT course walk, the End to End several times, and completing the full 85-mile Parish Walk twice. In 2003 she walked 900 miles from John O’Groats to Land’s End, 49 days with no rest days. She enjoyed the Camino to Santiago in 2015, 600 miles, and the Portuguese Camino in 2017, 400 miles. Milford Track in New Zealand, UK Coast to Coast, UK Dales Way, Mont Blanc Circuit in the Alps, Mount Kilimanjaro, and Machu Picchu in Peru with all five children. She has done the annual Peel Dip ever since coming to the island, 24 times to date, and she now does regular sea swimming once or twice a week all year round. Forget about wetsuits, her most recent challenge was a two-minute ice bath using the Wim Hof breathing method. 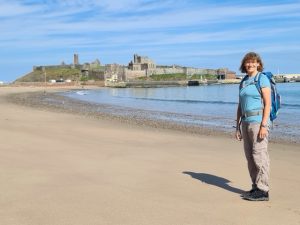