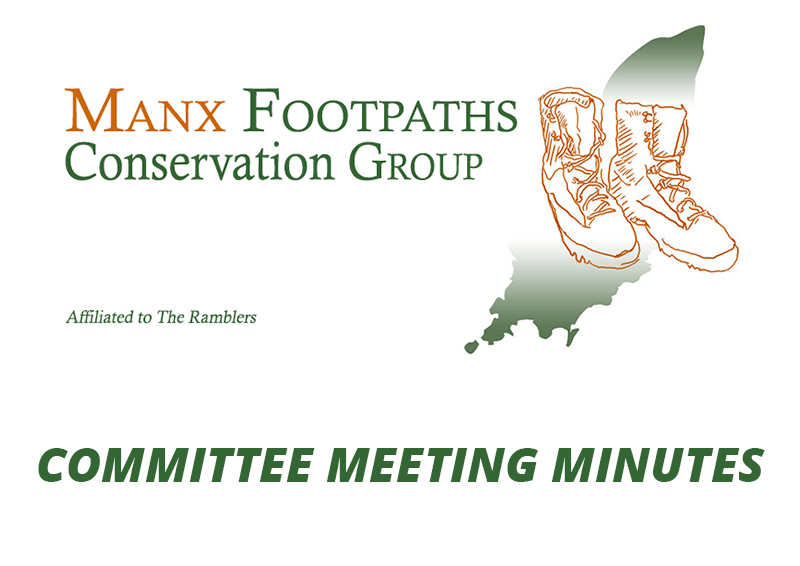 2. Minutes of the previous meeting: having been circulated beforehand, were approved, and signed by
the Chairman, Ken Harding.

3. Matters Arising from previous meeting:
• KH has written to Miles Cowshill of Lily Publications to request a meeting to discuss the
percentage MFCG receives from the sale of walking books. To date he has not received a reply.
• KH asked LP if we had heard from the ‘Keep in Touch’ group in Ramsey regarding a talk about the
history of the MFCG. LP replied that she has put ‘K.I.T’ in touch with DL who will do the talk in
September 2022. PM suggested having the same talk as part of our ‘Winter Talks’ series for next
winter.
• KH has booked the Annual Lunch at the ‘Talk of the Town’ in Douglas for Sunday 16th January
2022 at 1.30pm at a price of £23 per head for a two course carvery meal plus tea or coffee. KH
will put out a poster to all members closer to the time.
ACTION: KH to produce a poster for the Annual Lunch
• Debbie Broom has done the first of her monthly extended Sunday walks. This is a good addition
to our walks schedule and will cater for those who like a challenge.
• KH asked LP about First Aid Kits. LP said that all eight kits belonging to the club have now been
accounted for. LP will ask for them to be returned late in 2022 for renewal of date related
products.
• KH has created two group walking holidays to Northumberland for 2022. He has received
enquiries from several members and will put the full details onto the website.
ACTION: KH to put details of walking holidays on to website.
• KH has approached DEFA regarding MFCG potential sponsoring a Trig Point on their land. There
are fifteen ‘Trigs’ on the island and DEFA are more than happy to liaise with us regarding any on
their land. We would refurbish a trig and attach a plaque.
ACTION: KH to arrange with DEFA an appropriate trig for refurbishment and continue liaising.
• Navigation Courses for members. Committee members should ask during walks who would be
interested in a one day navigation refresher course. Something similar could also be rolled out to
members with no navigation experience. LP asked if KH could put some information out to the
members with details of what to expect and possible dates.
ACTION: KH to advise members of details.
ACTION: All committee members to discuss navigation courses with members when out on group
walks.
• LP asked if we should send out a reminder to members about the talk by Sue King on Wednesday
8th. PG said the Tony Archibald, LP and PM have reminded members on their walks. JV said that
this is an excellent talk and should not be missed. LP stated that we will provide face coverings
and gel for those who wish to use them. LP also said that Mylchreest Court insists that everyone
signs in and out at the door.

There has been very little movement since the last meeting.
Treasurer’s Report Meeting 8/11/21
Current a/c balance. £2,338.35
Savings a/c balance. £14,425.45
There have been £186 worth of subscriptions received
The only payment made was £9:80 for Covid protection materials.

6. Membership Secretary’s Report: Gill Smith 08.11.21
The group secretary now has online access to the bank account so is able to report to me any new
member fees that are received as they happen!!
There are currently 260 members.
A total of 12 new members registered in September, however one person has not yet paid so is not
included in the total of 260.
October saw 7 new registrations, one of whom has not yet paid so again, is not included in the total
of 260.
So far in November, there have been 4 new member registrations.
Please can the committee clarify, anyone joining in October/November/December – does their
membership fee cover them for the following membership year? I am unclear what the policy is.
(The Committee agreed that the membership fee should cover new members for the following year if
a new member joins in the last 3 months of the year and LP commented that we are extremely
grateful to Gill for doing this whilst on holiday. PM felt that the website and Facebook are
encouraging new members).

7. Data Protection: Gill Smith 08.11.21
To my knowledge there have been no data breaches in the last 2 months (ie since the last committee
meeting).

8. Footpaths Officer’s Report: David Leiserach 08.11.21
DL advised the committee that there are still five long term footpath closures. Baldhoon Road down
to Laxey Glen which has been closed since 2015
The Majestic coastal path around Onchan Head and the path around Castle Rushen Sports Field which
has been extended until May 2022.
Another long term closure is ‘Scout Glen’. A diversion has been proposed on the grounds that it is
more commodious for this path to be diverted. MFCG have no objection to this.
There is also a long term closure at Riverbank, Ramsey.
DL has met with Ffinlo Williams, the new member of DoI responsible for PRoW’s. Mr. Williams
appears to be keen to solve longstanding problems on the major long term closures and is opposed to
unnecessary closures.
DoI had planned to divert the PRoW at Earystane on the grounds that the diversion was more
‘commodious’. Due to public pressure and MFCG representation it has now been decided that this is
not the case and will not now be going forward.
DL advised the committee that when making objections to PRoW diversions we must object purely
on the terms of legislation. JV asked if applications for diversions have to go through local
commissioners to which PG replied that in this case there were strong objections from local residents
as they felt they were losing a ‘highway’.
KH added that he and DL had had a meeting with MHK Sarah Maltby re: a motion she is tabling to
government regarding maintenance of PRoWs and the creation of a separate government
department to deal with this. A report will be done and from that DoI will decide the way forward. DL
felt that we could ask DoI what the £100,000 budget for footpath maintenance is actually being spent
on. DL suggested there is not enough time for the whole process of government to take place in time
for the 2022 budget so we will probably not see anything positive come from this until 2023.
LP asked if ‘Footpath Friends’ are still active and where ‘FF’ have done work it has been to a high
standard. DL said that, between DoI, DEFA, FF etc. we are not sure which group/department are
responsible for which areas. DL has to report all footpath problems to the relevant government
department who will then pass the work on to either a contractor, FF or their own workforce.
LP asked if we should re-start ‘Adopt a Path’ that was active some years ago for our members.
Several members already have areas that they maintain by cutting back brambles etc.. She thought
that we could put an item on the website suggesting that members could do this.

10. Annual General Meeting:
LP said that the AGM is booked for 24th March 2022 at the Fairways Restaurant, Peel Golf Club and
the menu will be decided closer to the time.
KH and LP re-iterated DL’s comments at the previous meeting that we should ask members for
resolutions at least forty-two days prior to the general AGM notices going out and asking that they be
returned no later than 7 days prior to the general notices being sent to members (which is 21 days
before the AGM date).
Example:
• request for resolutions to be sent to members no later than Thursday 10th February 2022
• any resolutions must be received by the secretary no later than Thursday 24th February in order
to be included in the general AGM notices to send members
• general AGM notices to be sent to members no later than Thursday 3rd March
• nominations etc. to be received by the secretary no later than Thursday 17th March, seven days
prior to the AGM.
By doing this it will give members time to consider any resolution they are being asked to vote on.
KH went through the proposed amendments to update the constitution (last update was 2011) as
discussed at the previous meeting. After discussion all agreed with the amendments and KH will
formalise the proposed new constitution which will be presented to the membership prior to the
AGM in order for them to vote on it.
DL suggested that the positions of Data Protection Officer, and Safety Officer should be recognised as
committee positions as they are important for our insurance cover. All agreed.
KH said that when walking with their groups the committee members need to discuss with members
that there will be positions available on the committee after the AGM in 2022. As KH and PM will be
stepping down we will be looking for a new Chairman and Safety Officer in particular and there are
also vacancies for committee members. JV has kindly offered to remain as Treasurer for one more
year as there will already be two important changes on the committee. KH said that he and Fiona Vaz
are happy to continue to administer the website for the foreseeable future.
DL advised that our Thursday walk’s co-ordinator, Tony Archibald would like to step down from this
role. This is a non-committee role and preferably a volunteer will come forward from the Thursday
group.
ACTION: All committee members to discuss the committee vacancies with their groups.

11. Any other business:
PC commented that a member had asked for ‘what3words’ to be used in conjunction with a map
reference to describe the starting points for walks. It was agreed that the vast majority of our
members use a map reference and ‘what3words’ would be too difficult to administer on the schedules.
DL suggested it might be useful to encourage members to understand the usefulness of apps such as
O.S. maps, what3word etc..
LP suggested that we hold sessions to teach members how to use apps such as OS maps,
what3words, OS locate etc. as most people don’t know how useful they can be.
KH reminded the committee that the navigational and map reading courses for members in the spring
and will cover the use of apps etc..
PG reminded LP that we need members to do the readings for the Carol Service. LP gratefully
accepted his offer and will ask Tony Archibald and Theresa Anderson if they are available.
DL advised that the ‘Green Lane User Group’ (GLUG) is now known as the ‘Countryside Access Group’
(CAG). Their temporary constitution now states that all non-motorised roads are included in their
remit, i.e. greenways, bridleways, footpaths, heritage trails etc. and the group encompasses a larger
range of interested parties.